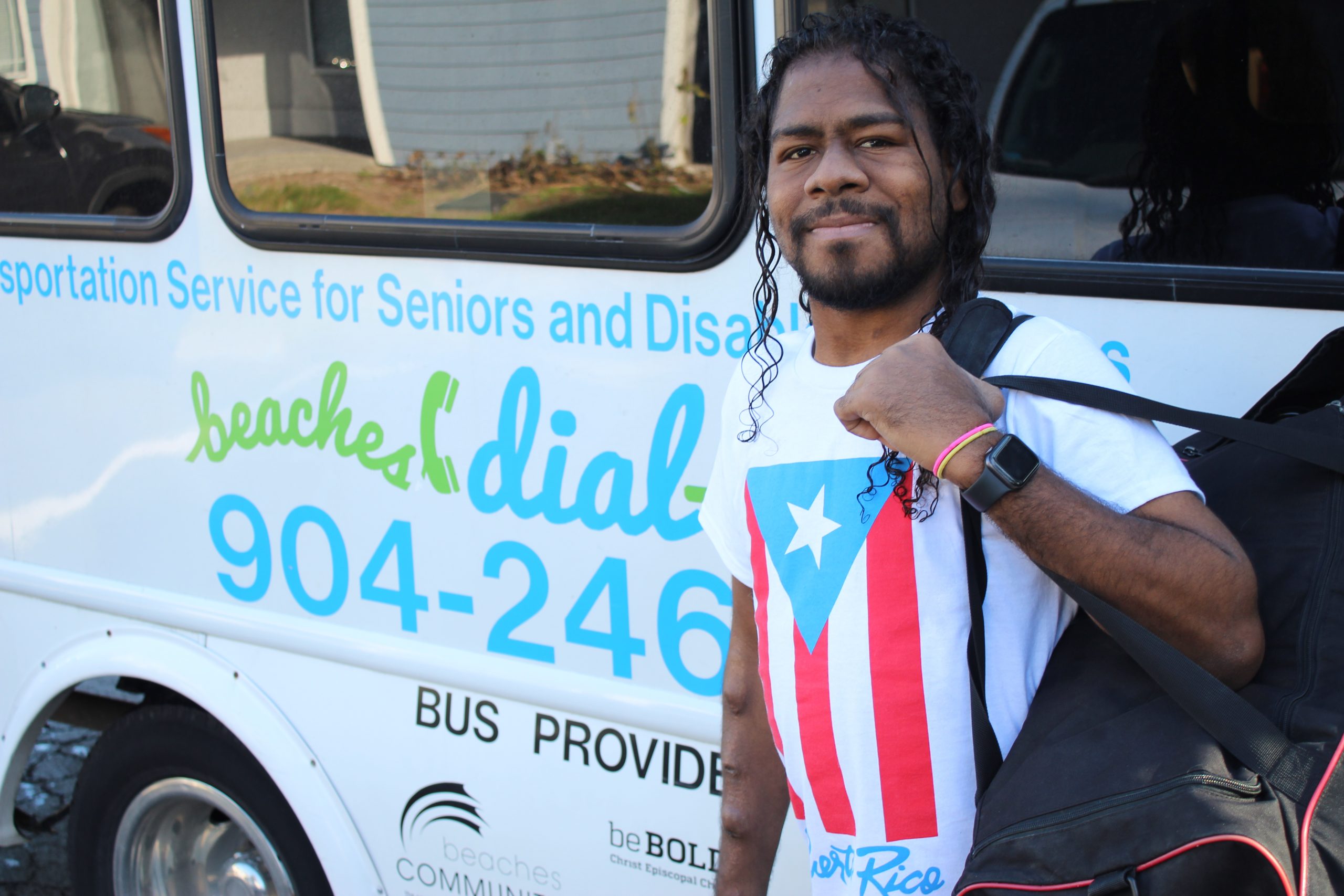 Posted at 20:04h in Client Spotlight by brandon@outofdustmarketing.com 0 Comments
0 Likes

After Joe Merle was born with a birth defect and abandoned by his birth mother at a New York City hospital, his chances of enjoying a quality life were extremely slim.

But the thirty two year-old Atlantic Beach man is living proof that faith and an optimistic outlook can overcome the health issues that have plagued him since be was born. Although he must undergo dialysis three times a week due to failed kidneys and he has no idea how long he’ll have to wait before he will receive a kidney transplant, his uplifting attitude is contagious to everyone he meets.

“Joe is our advocate, he’s the big star at the clinic,” says Shannon Dulce, clinic manager of the Fresenius Kidney Care Center in Jacksonville Beach. “He brightens up the place every time he comes here. He says hello to everybody, looks out for all the patients.”

“I try my best to keep a positive attitude. I’ll be like that until the day I die,” says Joe, who calls himself the clinic’s ambassador. “It makes me happy if I give someone a word of advice and it makes them feel good. I know I’m doing something right.”

“Joe’s like a brother to me and he’d give you the shirt off his back,” says friend Tim Payne. “He’ll always be family.”

Left at the hospital by his mother, whom Joe was told was a drug addict, shortly after he was born along with his brother and sister, the orphans lived in a foster home for several years. Fortunately, Joe and his older brother Maurice were adopted by Francisco and Enriqueta Merle, a Puerto Rican couple, when he was two and Maurice was three years old. (Their sister Jacqueline was adopted by Enriqueta’s sister). Joe had long hair as a toddler and when he was taken for his first haircut, the barber discovered an oversize bony growth on the left side of his head. Surgery was soon performed but the procedure permanently damaged his kidneys and he was given medication.

The family moved from The Bronx, New York to Puerto Rico when he was eight years old and doctors continued to monitor his kidneys, before eventually determining he would need dialysis until he could receive a kidney transplant. He remained on dialysis through his teen years and lived a relatively healthy life with his mother and brother in the small beach town of Patillas, Puerto Rico, earning a bachelor’s degree in business and marketing from the Universidad Intermericana Guayama de Puerto Rico. At age twenty four Joe receive a kidney transplant.

Three years later, however, the summer of 2016 became the darkest time in Joe’s life. His mother became ill with numerous health issues, and she needed to undergo surgery for a clogged artery in her neck, mostly likely because she wasn’t getting enough blood to her brain. Five days after the surgery was performed, the woman who adopted him, cared for him, and loved him more than any person in the world, passed away.

“The day (she died) everything felt wrong from the moment I woke up to the moment I went to sleep.” When he received the call in the middle of the night that she’d passed away, Joe says, “I didn’t believe it, I’d just spoken to her. My mother was everything to me and I couldn’t comprehend that she was dead. I blacked out. Then I felt a hand touch me. I know the Lord touched me and said, ‘Let it go’.”

After his mother passed away, his mental and physical health suffered. He stopped taking his medication regularly, and he didn’t want to eat or sleep. He fell into “the ultimate depression, as deep as any human being can go.

“One night I felt a pain in my kidneys but I ignored it,” he says. “I didn’t sleep that night and I knew something wasn’t right with my body. I went to see my doctor and he immediately sent me to intensive care. After twelve hours in the hospital, my doctor told me I needed to stay. That’s when everything went downhill.”

The creatinine levels from his kidney had skyrocketed, and the kidney he’d received just three years earlier failed. While in the hospital he received high doses of a medication which temporarily dropped his creatinine levels to normal, but once again he would need dialysis treatments.

When the children’s service department in Puerto Rico demanded that Joe’s handicapped brother Maurice be taken from him and placed in a home in 2017, Joe contacted their cousin in Jacksonville and the two moved here so they could remain together. The change in scenery, however, didn’t immediately help Joe’s mental health, as his feelings of depression and unhappiness continued. “When I came here I weighed less than a hundred pounds,” he says. “I was pale, I didn’t have any color in my skin. And I didn’t want to talk to anybody.”

After he began taking dialysis in Jacksonville Beach, Joe says he met a young woman whose cheerful outlook changed his life. “I became good friends with a young lady and I asked her, ‘Why are you always happy?’ She told me, ‘You can’t live negatively on a daily basis. I’m diabetic, I have high blood pressure, high cholesterol, heart problems. You have to have faith.’

“I promised her on that day I’d start smiling again. And things started looking up for me and my brother. Two weeks later she passed away. Ever since I made that promise, I’ve never looked back. I try to make friends with everybody, I try to help anybody I can.”

Joe undergoes four hours of dialysis three times a week. “I’m not going to sugarcoat it. There are times I come out drained but most of the time I’m fine until I start walking up the stairs to my apartment, I get to the top of the stairs and I have to catch my breath until my body gets back to normal. I drink cranberry juice, take a nap and I feel better.”

Unable to afford a car, Joe relies Beaches Dial-A-Ride for transportation. Dial-A-Ride provides transportation for elderly and disabled Beaches residents who can no longer drive and do not wish to depend on family or friends.

“I tell other patients Dial-A-Ride will never leave you behind,” Joe says. “They’re one hundred percent accurate, they make sure their clientele is treated right, make sure you are taken care of. I recommend Dial-A-Ride to everybody who has medical issues and doesn’t have a ride.”

“Dial-A-Ride is the best thing on earth for our patients,” Shannon Dulce adds.

“We at Dial-A-Ride take great pride in helping Joe as he continues his dialysis treatments,” says Vicki Wycoff, President of Beaches Council on Aging. “He is like a ray of sunshine when he gets on the bus.”

“Joe is such an inspiration,” says Lori Anderson, Executive Director of Beaches Council on Aging. “His faith and joy are contagious. He is why we do what we do.

“There are people out there who didn’t ask to be in their current situation. Whether it’s someone like Joe or an older adult who had their car keys taken away and they can no longer drive, Beaches Council on Aging is here with our program Dial-A-Ride to give them their freedom and independence so they remain happy and healthy like Joe.”

Since his Social Security disability income can’t cover all his bills, Joe works part time as a host at Carrabba’s Italian Grill in Jacksonville Beach.

“I enjoy every single moment working there. I have customers I enjoy seeing twice a week. My job is to make sure from the moment you walk in until the moment you leave, you have a great time.” Joe proudly displays a colorful drawing a young girl made for him. “I became friends with her. She had a shy look on her face when she gave it to me. I told her I loved it and it was going to be with me forever. And she had a beautiful smile on my face.”

“He’s a joy at work, he’s always kind and welcoming to everyone,” says friend and co-worker Laura Bates. “Our guests love him, and I can say personally when I’m in a bad mood, he lifts me up. Despite his health issues, he’s got one of the best attitudes of anybody I’ve ever met.”

Like his fellow patients at the kidney care center, Joe is enrolled in a transplant program at the Mayo Clinic awaiting a kidney from a donor, preferably a living donor that may or may not come.

“I keep a positive frame of mind and think how fortunate I am that I’m alive every single day, and I thank God every night when I go to sleep,” he says.